Reminder Parking Permit Get Yours Now! 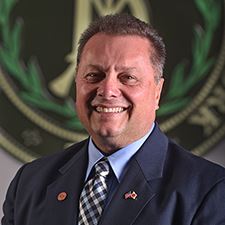 Michael A. Loguercio Jr. was elected to the Brookhaven Town Council in 2015 and re-elected in 2017 and 2019. He has over 40 years of experience as a New York State licensed insurance broker and insurance technology expert and was also a journalist for a 125-year-old insurance trade publication where he wrote a bi-weekly column on risk management for more than 10 years.

Born and raised in Brooklyn, NY, where he attended a Catholic elementary school and a NYC public high school, Michael’s family moved to Ridge in 1978, where he still resides. In his community, Michael served 12 years (2004-2016) on the Longwood Central School District Board of Education, including 4 years as President and 3 years as Vice President.

As President of the Longwood Central School District Board of Education, Michael led the district governance team through some of the most difficult financial times and was extremely successful in maintaining services and programs for students, improving the infrastructure, minimizing expenses, and preserving jobs.

Michael also served as the Longwood School District Voting Delegate to NYS School Board Association, and amongst many other accomplishments there he successfully lobbied for NYS legislative support on bills passed in the legislature such as preventing convicted sex offenders from coming within 1000 ft. of school property. Michael also served numerous terms as a Director on the executive board of REFIT NY (Reform Educational Financing Inequities Today) and served for 18 years on the Legislative Committee.

In our community, Michael is a Captain in the Ridge Volunteer Fire/EMS Department; and a member of the Bellport Rotary Club, Bellport Chamber of Commerce and the Central Brookhaven Lion’s Club. He served two terms on his Church’s vestry and is a member of many local civic organizations.

In 2013 Michael was awarded the SCOPE “Community Service” award for his commitment to the public. He also received a “Distinguished Service Award”, and a “Lifetime Achievement Award” from the Longwood Central School District PTA Council. In addition, the Tri-M Music Honor Society named him as an “Honorary Life Member” for his continued support of their organization to serve students of music and fine arts.

Professionally, Michael currently serves as Vice President on the all-volunteer executive board for the “Professional Insurance Agents of New York State” in Albany, where he has been honored with a “Distinguished Service” award in September 2001; “Insurance Professional of The Year” award in 2009; “Lifetime Achievement” award in 2012; and “Special Service” awards each year from 2013 to 2020 for his dedication to the betterment of the industry. Michael is also an active Past-President of the “Young Insurance Professionals of NYS”, mentoring those who are new to the insurance/financial industry.

Educated at City University of NY; Suffolk County Community College; St. Joseph’s College; and University of Phoenix, Michael has an AAS in Criminal Justice and a BA in Business Administration. Michael has two children: a son who is an attorney on Long Island, and a daughter studying medicine in Florida.

View an interactive map of the Town of Brookhaven or view a PDF map to find your Council District.